After reviewing both the Phottix Strato and the Yongnuo RF-602, here's the $64,000 question: Are the Strato worth the premium compared to the current reigning budget champ? 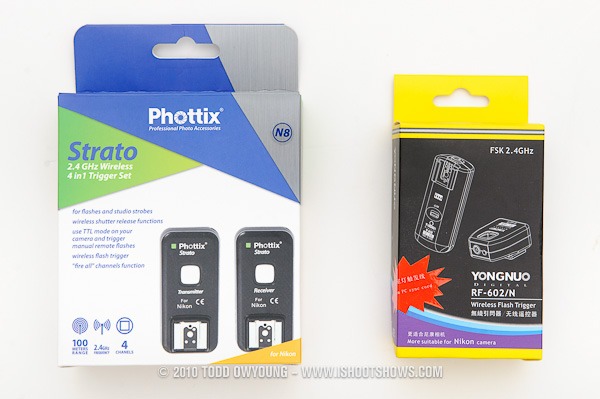 Naturally, one shouldn't judge a book by it's cover, but I do think that the packaging for the two might be of interest to some nonetheless. Above are the packages for the transmitter-receiver sets for the Strato and RF-602.

But let's get to the real matter at hand – what's inside the boxes themselves.

By the numbers, on a basic level, the Strato offer very similar specs to the Yongnuo RF-602. And, on the surface, the two 2.6GHz triggers perform very similarly. However, I think that there are some key differences for anyone looking at these two wireless flash triggers. The TTL-pass through capability of the Strato is one of the features that Phottix touts, and I think that it's a nice little bonus that opens up a lot of possibilities. Aside from the ability to mix the Strato triggering system with Nikon's CLS or Canon's eTTL IR triggering systems, the pass-through hotshoe opens up the possibility of using the AF-assist lights from external flashes.

Both the Yongnuo RF-602 and the Phottix Strato promise a max flash sync speed of 1/250, depending on the limit of the camera. In my experience, the Yongnuo triggers fall a little short, with only 1/200 clean triggering with my cameras.

In addition, The Strato wins for a simplified interface, with more solid-feeling buttons and a sliders for setting the remote channels – both an upgrade from the Yongnuo RF-602's dip-switches and flimsier feeling on-buttons.

All the important switches on the Strato receivers are on the units' side, compared to being on the top of the Yongnuo receivers, earns the Phottix bonus points. For me, one of the most impressive parts of unboxing the Strato system was that the transmitters and receivers come with absolutely everything I'd need to get rolling. From the male PC-sync cables to use with small flashes instead of the hotshoe to 1/4″ adapters for studio flashes, the Strato come with it all. And add to that the simplicity of 3.5mm miniplugs instead of proprietary jacks, and Strato wins again.

One thing I do like about all the Yongnuo accessories is that the cables are coiled, while only the shutter release cable of the Phottix offers this feature. When it comes to batteries, both receivers units of the Phottix and  Strato ship with brand name AAA batteries. With the abundance of rechargeable AAA batteries like the Sanyo Eneloop AAA NiMH, it's great to see this battery size in use.

Where the Phottix Strato system pulls ahead is in its use of the AAAs in the transmitter as well. For it's transmitter, the Yongnuo RF-602 uses uses CR2 batteries. While rechargeable CR2s are available, these batteries are going to require a dedicated charger. In contrast, the Ansmann Energy 16 Charger One of the biggest differences between the Strato and the RF-602 is their respective prices, and here the Yongnuo RF-602 hold a clear and large advantage. Depending on the source for the RF-602s, (I prefer Yongnuo's official store), they're going to come in at roughly half the price of the Phottix Strato.

The RF-602 can be bought directly from Yongnuo for roughly $39 USD shipped, with additional transmitters costing about $24 USD when bought individually. If you buy multiple receivers with the kit, the price per-item becomes even cheaper.

The Phottix Strato, on the other hand, carries a premium. A transmitter-receiver kit weighs in at $74 USD , while an individual receiver costs about $51 USD.

In purchasing a set of two transmitters and six receivers, my Yongnuo kit came in at $142, including shipping. To build a comparable kit of the Phottix Strato would cost twice that amount.

For photographers just dabbling in off-camera flash and looking for reliable wireless flash triggers on the cheap, the Yongnuo RF-602 perform so well at such a low price that they can't be ignored. In terms of real-world performance, the only thing I can knock the Yongnuo on is the more limited flash sync at 1/200.

At twice the price from the Yongnuo RF-602, are the Phottix Strato twice as good? In terms of triggering your flashes, I would say no. Both perform to similar distances and similar triggering reliability (even if the Yongnuo don't trigger cleanly at 1/250 while the Strato do).

However, when you start to factor in all the other details about the Strato, from the TTL pass-through, better connectivity, superior build quality, better battery system, simplified interface, and everything else, the Phottix triggers are easily worth their price. Ounce for ounce, the Strato are simply a better wireless flash trigger and have a price tag to match.

Get the Yongnuo RF-602 directly from their eBay store: HK Yongnuo Photo Equipment

Get the Phottix Strato from their official store: Phottix Store

Purchasing through my affiliate links keeps me hopped up on the green tea that fuels these reviews and my photo editing late at night after the rock show.