After all, it's not every day that a lens inspires a grass-roots movement to make a Nikon F-Mount to Canon EOS adapter (which culminated in the now widely-available Novoflex Canon EOS to Nikon F-mount adapter.

I've been using the Nikon 14-24mm ever since it's introduction – here's my extensive review of this big-eyed beast.

If you find this review helpful, please consider buying your next photo gear purchase from B&H,Amazon.com, or any of my other my affiliate links.

To learn how you can help support www.ishootshows.com, visit the page Buy Yourself Something Nice. Now with that out of the way, let’s get to the review.

While some decried the diminished zoom range and loss of the useful 35mm reach, Nikon's new ultra-wide lens quickly became regarded as the “killer app” for the Nikon D3, thanks to its superlative image quality.

Here we get to see a cross section of the 14-24mm's huge front element in all its glory – and a look at how relatively packed this lens is with ED (extra-low dispersion) glass and aspherical elements.

In the MTF chart, we can see that at f/2.8, the 14-24mm should deliver almost perfect contrast right to the edges. Sharpness at 14mm is extremely good in the center of the lens and most of the frame, while at 24mm the lens features softer corners. Considering that this is wide-open performance, these graphs promise some excellent real-world usage.

What's In The Box

The Nikon 14-24mm f/2.8 comes with all the standard goodies, including a nice hard-case. But you might as well throw that away, because this lens should be super-glued to your camera – or at least in your camera bag, ready to jump into action. The 14-24mm f/2.8 was one of the first lenses where I got a taste of Nikon's Nano coating. In short, this lens made me a believer. Overall, flare and ghosting is very well controlled in this lens, despite having an absurdly large front element.

Of course, the real appeal of this lens for photojournalists is the extremely wide field of view and coupled with the fast f/2.8 aperture. Even if it weren't for the excellent optical performance, 14mm and f/2.8 is almost reason enough for this lens to exist. With AF-S, ED glass, Nano coating, and just about every other feature Nikon can pack into a lens, the 14-24mm has no shortage of recommendations.

But the real test of rigorous use on assignent? We'll get to that soon enough. 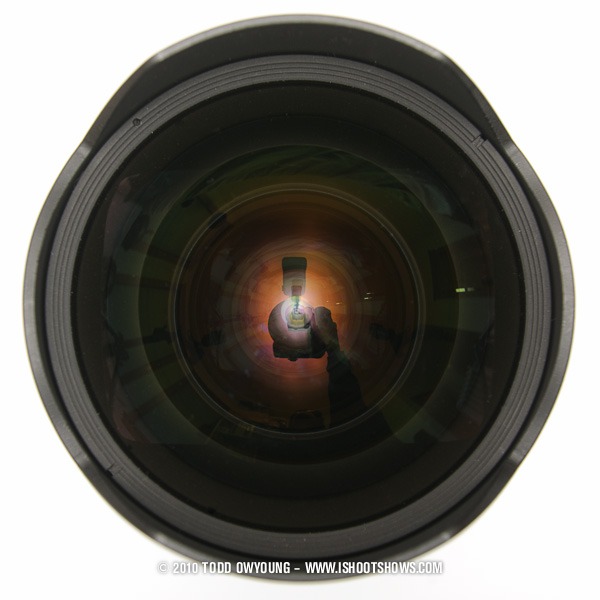 This is a fat lens. Between the built-in lens hood, the absurd girth, and the huge, bulbous front element, the 14-24mm is one of those pretty-ugly lenses that demands professional respect and implies fantastic performance. Because if it didn't perform, there's no way a lens should be this weird looking. Just like most all professional Nikon zooms, the Nikon 14-24mm f/2.8 features the zoom ring close to the lens mount for easy control, with the focusing ring closer to the front of the lens. The one switch on the Nikon 14-24mm f/2.8 is the standard M/A -M switch to toggle between Autofocus with Manual override or Manual focus-only.

The build quality of the Nikon 14-24mm is excellent. It's barely worth mentioning, so here are some more photos of the lens, including how beat-up looking the lens mount of my copy is. While most f/2.8 lenses take a 77mm filter, the front element of the Nikon 14-24mm f/2.8 is so large that this feature is impossible. In fact, due to the 114º field of view at 14mm, a front filter would have to be so much larger than the pro-standard 77mm that a suitably large clear or UV filter large enough would be a several hundred dollars itself. 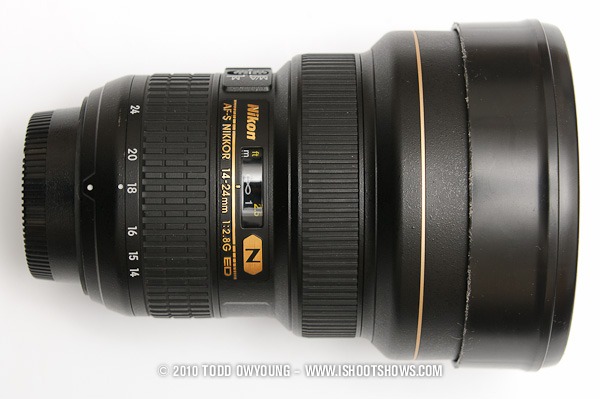 Instead of a normal, pinch-style lens cap, the 14-24mm features a press-on cap that is held on by friction.

On the good side, the cap is simple to remove. On the bad side, the size of the cap means that it's harder to stow in a small camera bag, and there's a chance that it might naturally come off the lens and get stuck in a tightly-packed bag when you pull out the lens.

One unique element of this lens is the integral lens hood, which while common in fisheye lenses, are a bit more of a novelty on a zoom like the 14-24mm. However, this integrated lens hood is a welcome feature, as it means the lens is always ready to go with optimal protection from stray light and that the front element has some built-in protection as well. In my use for live music photography, the only AF issues I've experienced have been when shooting backlit performers at a very steep angle at 14mm. There can be a tendency for the camera's AF to lock onto a higher contrast area behind your target if the subject is relatively small in the frame.

The combination of a very wide field of view (114º!) and the fact that your AF sensors are larger than indicated in your camera's viewfinder mean that careful focus lock is really key. Of course, these considerations all rest with the operator – don't blame the lens.

As I mentioned earlier, the Nikon 14-24mm f/2.8 was one of the first of Nikon's new generation of zooms that I used which featured Nano coating, AF-S focusing motors, and updated (or new, as the case is with the 14-24mm) optical designs.

Overall, the image quality rendered by this lens is almost flawless. The the areas of color and contrast, the 14-24mm is a stellar performer, even wide open.

In addition, flare is very, very well controlled in this lens, especially for how large the front element is. When the lens does flare and exhibit ghosting, the artifacts are small and tight.

As with all of Nikon's pro lenses, the sharpness of the Nikon 14-24mm f/2.8 is not really something that's going to require too much discussion.

In fact, the Nikon 14-24mm presented such a meaningful increase in sharpness over the entire field that Canon users were clamoring for an adapter to mount this Nikon ultra-wide on their 1D Mark-III and 1D Mark-IVs.  You can check out 16-9.net's infamous test where the Nikon 14-24mm spanks the Canon 16-35mm f/2.8 II and Contax 17-35mm f/2.8. 16-9.net also tested the Nikkor against Canon's 14mm and 24mm primes, and the zoom still came out on top.

Whether it's landscape or architecture work stopped down, or shooting live music wide open at f/2.8, this lens always delivers. It's equally at home as wide open as it is at f/11.

In short, this fat little zoom from Nikon is as good or flat-out better than just about anything else in the overlapping range.

We could look at some 100% crops, but then again we could shoot some boring test charts, too, or start looking at Henri Cartier Bresson prints under a loupe for signs of motion blur and blocked up shadows. For now, let's just look at some real-world samples shot with this lens instead. I promise the Nikon 14-24mm is plenty sharp. 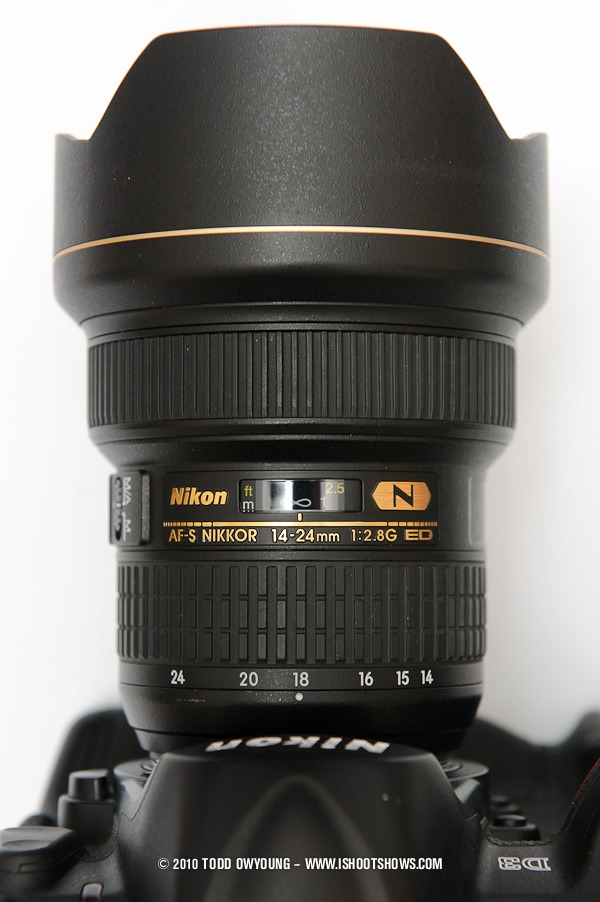 What you get in the 14-24mm is a lens that surpasses the ordinary capabilities of a midrange zoom like the Nikon 24-70mm f/2.8 for extraordinary results. The extreme field of view alone allows the 14-24mm to effortlessly deliver dramatic perspectives, while the optical quality is as good as anything – prime or zoom – in its range.

For my specialty of live music photography, the Nikon 14-24mm if/2.8 is a lens that's wrong about 90% of the time*. This fact doesn't prevent me from trying to use this zoom at every opportunity. The Nikon 14-24mm f/2.8 is just that good – it has you chasing the dragon for the drama only possible at extreme wide-angles.

Where To Buy – Recommended Retailers

I bought my 14-24mm f/2.8 from B&H in NYC, where I buy all my photo gear. If this review and other content on www.ishootshows.com was helpful to you, please consider supporting this site and purchasing your photo equipment any of the links in this review, my support page, or elsewhere on my site.

If you do buy through B&H or any of my affiliate links, drop me a line! I’d love to hear about what you picked up. B&H is where I personally buy the vast majority of my gear, and I’m looking forward to bringing you more reviews thanks to their equipment loans.

Back Pain? Use a Photo Belt System for Event Photography